What is a Global Shutter?

Why does it matter? And do you need one for 360 tour photography?

Why does it matter? And do you need one for 360 tour photography?

Back in the days of film cameras, the sound of camera shutters firing when photographers captured photos of a famous person on the runway seemed deafening (from watching old clips on television).

Modern digital cameras (including your phone) have no physical shutter, though many have the nostalgic option for a ‘shutter click’ noise that you can turn on and off.

Whilst some DSLR’s still make use of mechanical shutters (they do still offer some advantages to photographers), almost all 360 cameras I know of use some form of electronic shutter.

An electronic shutter powers-on a digital sensor for a selected amount of time (it’s the equivalent to physical shutter opening and closing, but there is no physical action – it’s all electronic).

Most digital cameras, including 360 cameras, typically use of CMOS (Complementary Metal Oxide Sensors) sensors. These sensors use a rolling shutter, where image rows are read out and reset sequentially (the sensor activates one row of pixels at a time).

High-end cameras use CCD (Charged Coupled Device) sensors with a global shutter (sometimes referred to as a total shutter). A global shutter takes a snapshot representing a single instant in time – all pixels collect light during the same time interval.

One of the clear advantages of rolling shutters is that they require less circuitry compared to the a global shutter. This makes CMOS sensors less expensive to manufacture. It is for this reason CMOS sensors are found in camera phones, digital cameras, and consumer to prosumer cameras, including 360 cameras.

The downside; rolling shutters can can often cause motion blur and image skew: 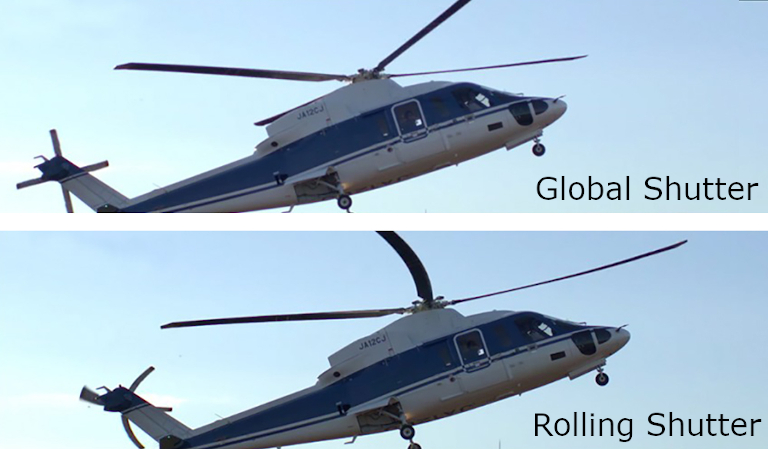 Motion blur occurs from rolling shutters because the rows of photodiodes (pixels in the sensor) do not collect light at the same time (unlike a global shutter where the entire image is capture at once).

Try to visualise the photo of the fan being taken with a rolling shutter. The top row of pixels are the first row to start collecting light, once complete, the second row fires, and so on until the final row has fired.

Generally speaking, as the sensor gets larger and higher in resolution, the greater potential there is for rolling shutter artifacts; because the larger the sensor area, the longer the readout of that sensor will take (because there are more rows of pixels).

A global shutter captures all rows at the same time, so the objects in the image are always being captured at the same point in time, significantly reducing the chance of motion blur (but not eliminating it entirely).

And whilst you might not be downhill mountain biking when capturing 360 tours, if you have a camera mounted to a backpack there is a certain amount of ‘action’ involved. 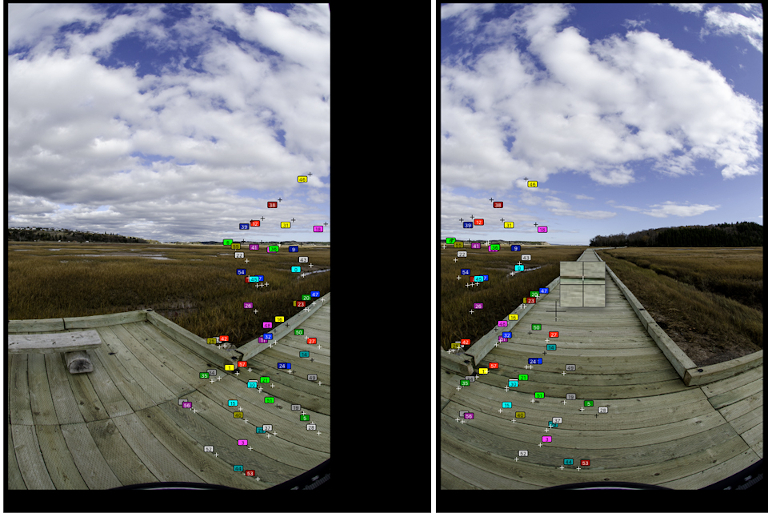 If the photos captured by each sensor are widely different due to image blur / skew, it can be very difficult for the stitching software to find control points (regions of two camera photos that refer to the same point in space used to join images).

This is down to the data transmission limitation imposed by the sensor and other camera hardware (the maximum bit rate).

In order to transmit the data for the entire image at the same time (versus in chunks like a rolling shutter), the size of each pixel in a CCD sensor (global shutter) is normally bigger than in a CMOS sensor (rolling shutter).

Larger pixels lower the image resolution (the sensor cannot hold as many) and consequently, the amount of data being transferred is lower.

In 360 photography you’re dealing with 2 or more sensors in the camera. This makes life a little more difficult (for the manufacturer).

Similarly they also write logic into their stitching algorithms to reduce the problems that can arise from the use of rolling shutters.

You’ll see many 360 cameras with CMOS sensors marketed with some sort of ‘stabilisation’ features (or similar). Generally speaking, this all handled by the camera firmware or stitching software.

The benefit of modern camera technology is a lot of issues can be fixed with software; camera firmware updates, stitching software updates. Sometime the frustration to update software does pay off.

And developers are delivering better software as the market continues to grow and the range of telemetry captured by cameras increases and becomes more accurate.

For example, gyroscopes measure camera rotation. These measurements can be used in conjunction with compensatory algorithms to achieve rolling shutter correction in images.

Software is where most camera manufacturers now compete with each other. Many are using the same off-the-shelf (e.g. Sony) sensors in their cameras, so it is their software that largely controls differences in image quality.

If you’re building your own camera or stitching software these are all challenges you need to think about. For buyers, the reviews will help you decide if the camera manufacturer has any areas for improvement in their software – that they might want to fix through updates…

Do you need a Global Electronic Shutter?

With camera manufacturers competing on both price and image quality, there are a very limited number of 360 cameras with global shutters on the market, due to the higher cost of the sensors and the lower image resolutions the sensors offer.

If you’re shooting immersive VR content with lots of fast-moving motion, a 360 camera with CMOS sensors (global shutter) might be worth the cost to buy (most more than $10,000 USD+).

For outdoor tours viewed on PC’s or phones, it’s overkill.