Now we know some of the fundamentals, this week, lets look at how we can merge the two fisheyes together into a single equirectangular projection.

Angle of view and field of view

Angle of view (AOV) and field of view (FOV) are very similar.

FOV and AOV can be calculated both horizontally (how far the lens can capture left and right) and vertically (up and down).

Below is an example of AOV and FOV: 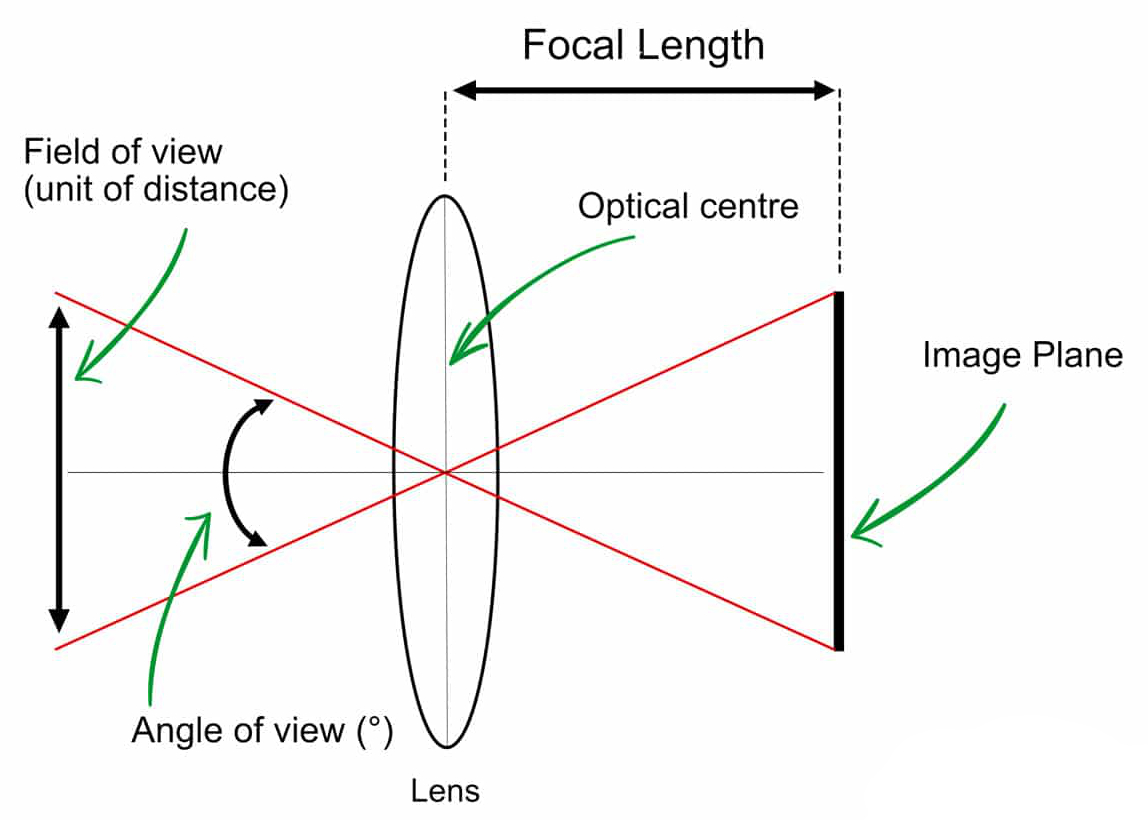 For the remainder of this post I’ll use FOV, but what I am actually referring to AOV as shown in the above diagram.

The FOV is vital during stitching of the front and back images as it defines how much of the two images will overlap (duplicate pixels).

Here’s the world mapped in a fisheye with a 180 degree horizontal and vertical FOV. 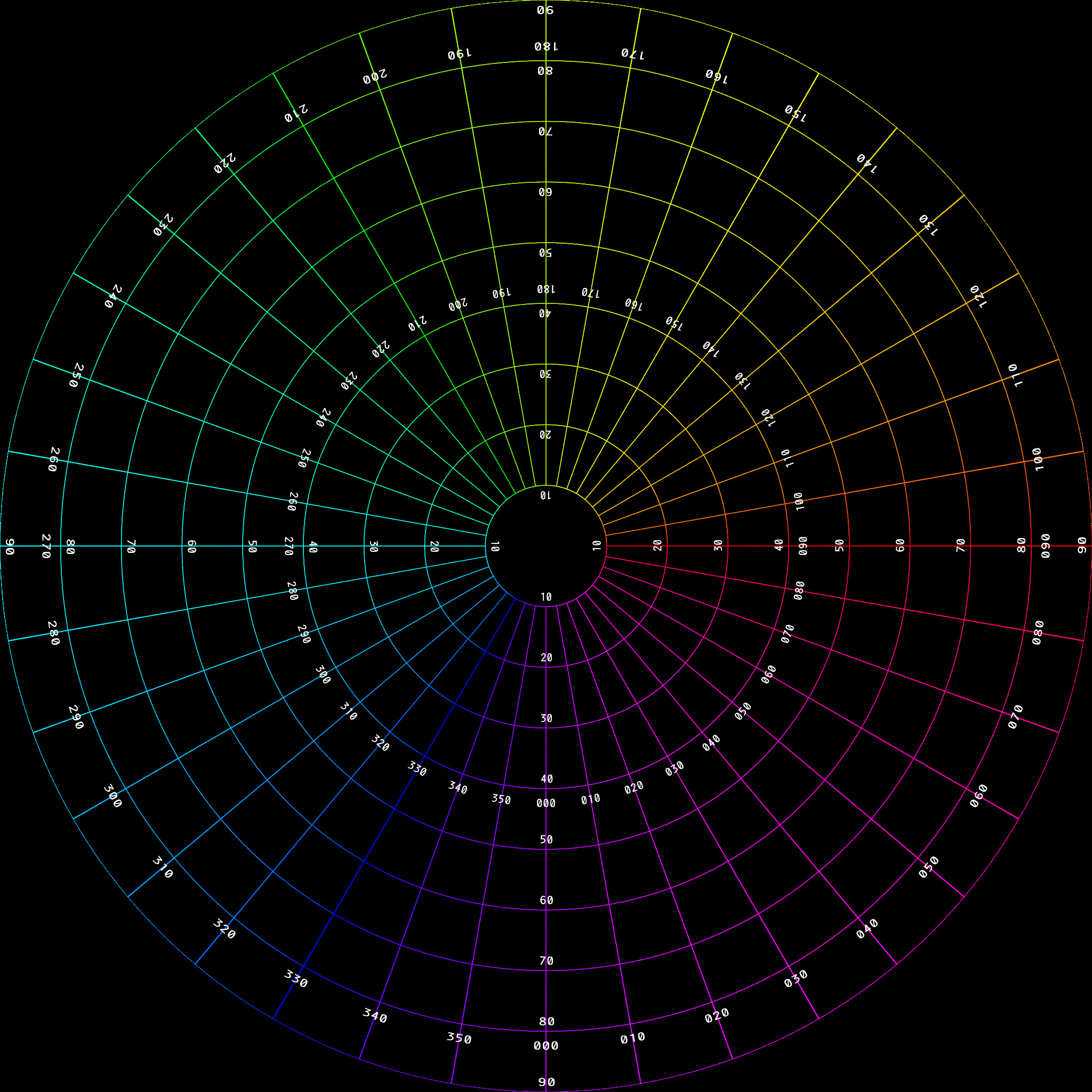 It makes sense that it occupies half of a spherical (equirectangular) projection, which captures the entire visible universe from a single position (2 x 180 degrees = 360 degrees).

Below shows the fisheye grid mapped in the equirectangular space; 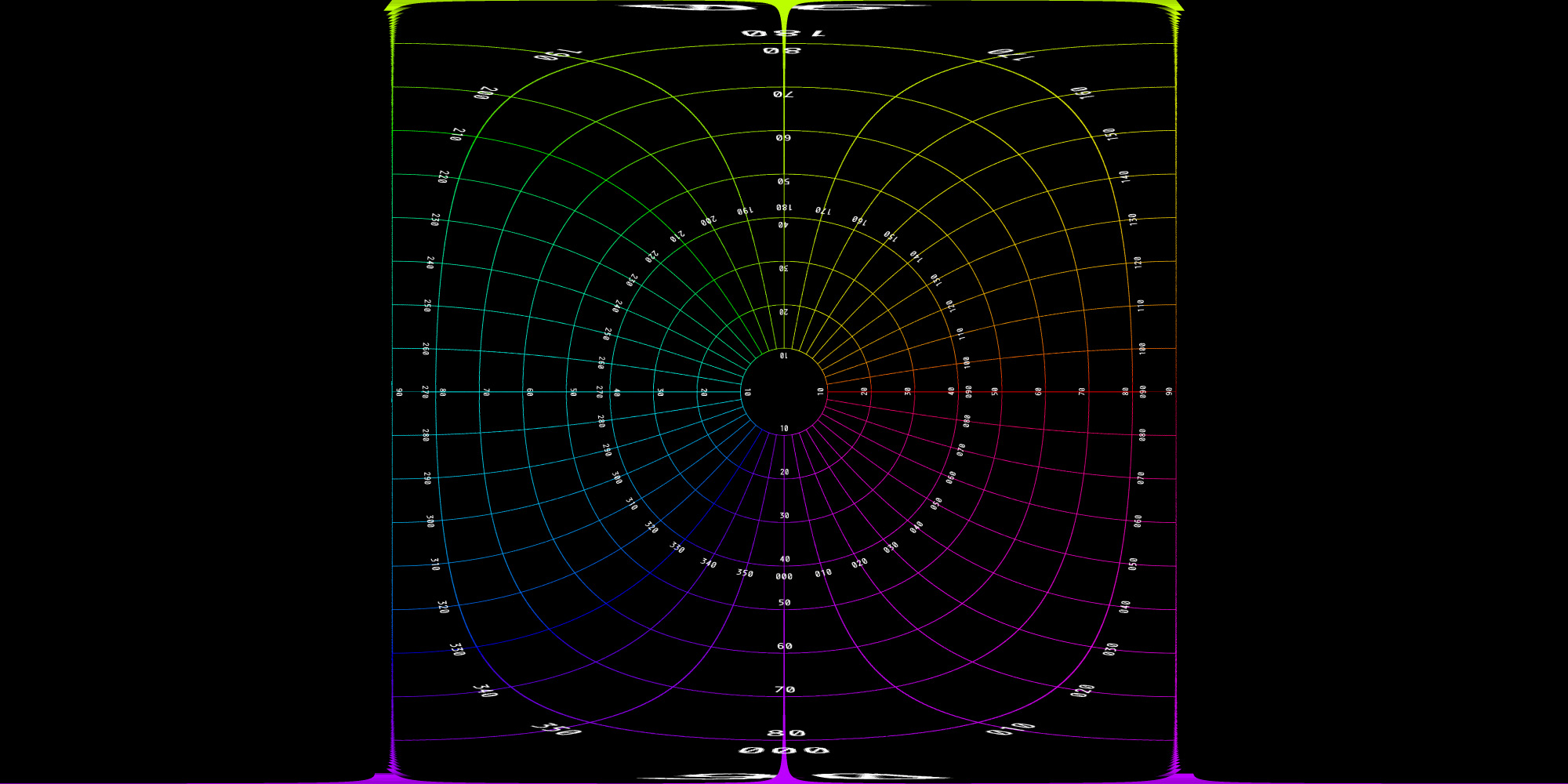 Note how the distortion of the horizontal is almost zero, whilst distortion along the vertical (y) axis increase as you move away from the center. We’ve already covered projection types and why this happens previously (here).

Looking at this transformation in a real photo. 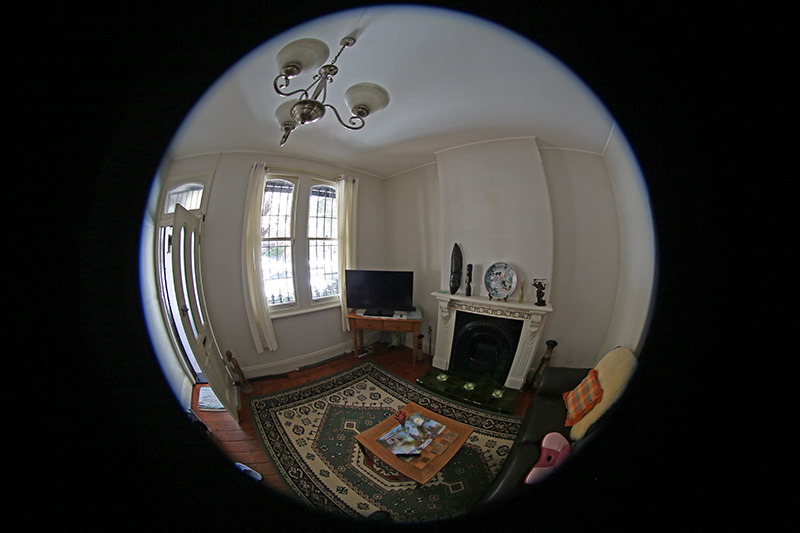 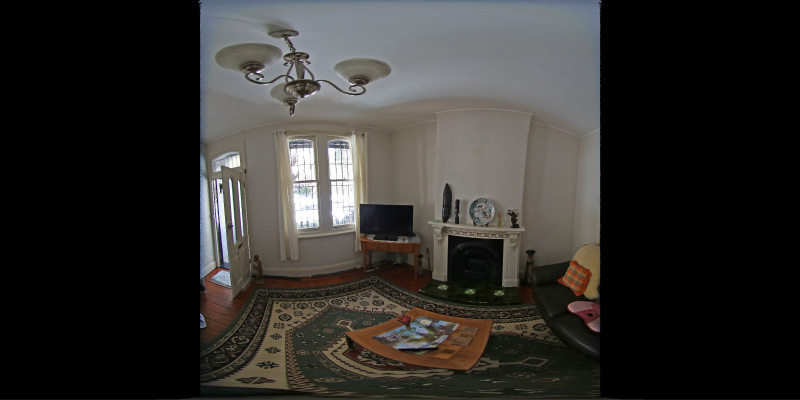 Many 360 cameras use lenses with a field of view greater than 180 degrees. This results in areas of overlap when creating a single image from both photos (assuming both fisheye lenses have the same field of view).

Here’s the world mapped in a fisheye projection with a 220 degree field of view. 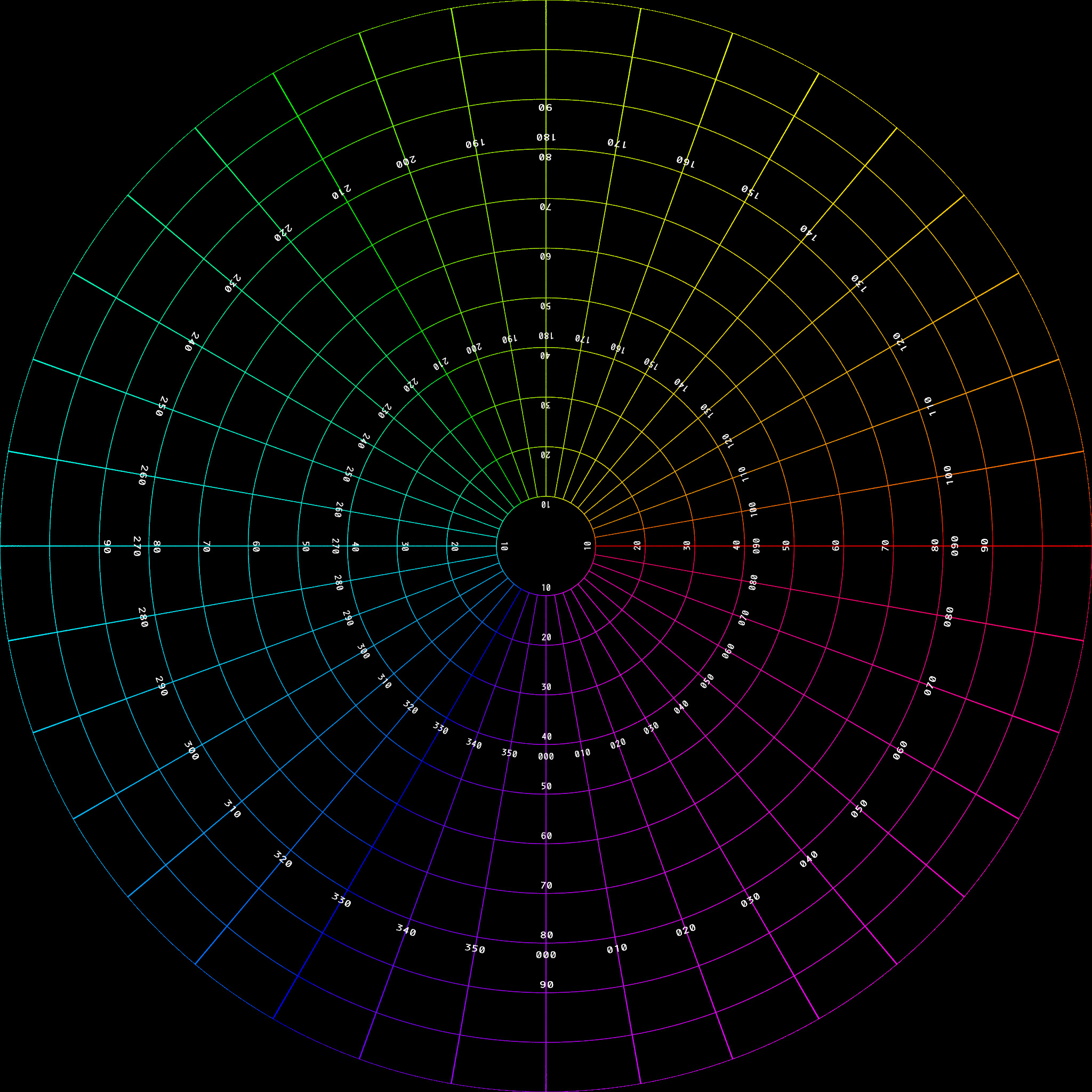 You can see there are more squares along each axis. That’s because the 220 degree field of view captures more of the world. 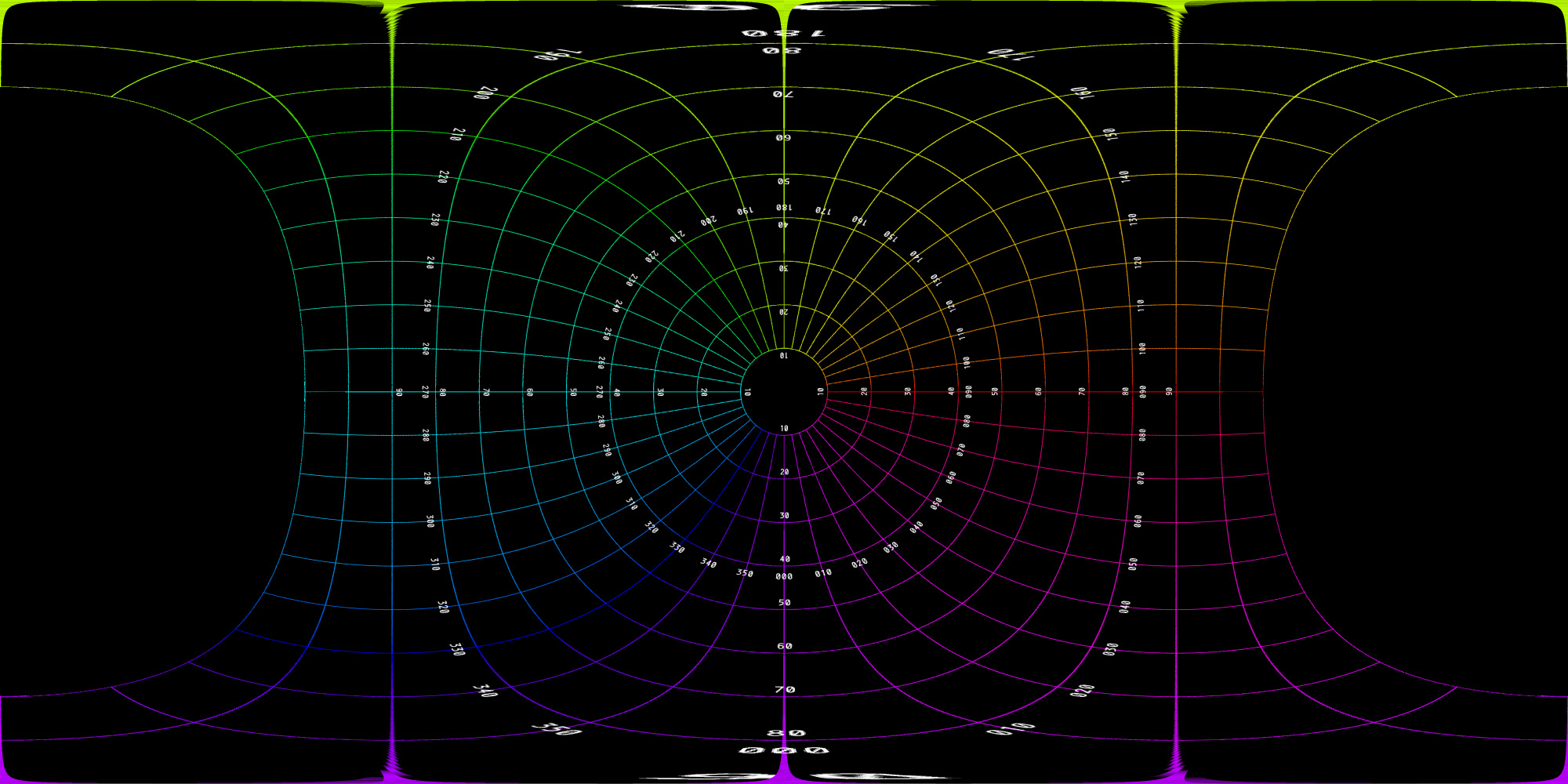 When transformed to an equirectangular projection, you can see the squares of the fisheye go beyond the square edges of the 180 degree example. Again, this is because the 220 degree field of view captures more of the world.

When putting both fisheyes (front and back) into the equirectangular space, these are the areas of duplicate pixels that need to be blended during stitching.

Before getting into stitching, we first need to establish the FOV of the GoPro Fusion.

The Fusion captures a lot of data in the metadata of the raw fisheye frames. Here’s an example;

You can see FOV is reported in the metadata above as 117.1 deg – this is obviously incorrect. In my test images I can see part of the mount below the camera, so FOV must be closer to 180.

Even without seeing a test photo, for a true 360 (without guessing missing pixels), the front and back lenses need an FOV of at least 180 degrees, as mentioned above.

GoPro themselves mentions the FOV of each lens is greater than 180 degrees.

In the case of full fisheye circular images (what the Fusion produces), the FOV can be linear (horizontal FOV = vertical FOV) or non linear.

We know the Fusion produces images with a larger width (3104) than height (3000) so the raw FOV is non-linear. I’ll come back to this a little later.

I first decided to conduct a rough (non-scientific) test to try and estimate the Fusion lenses FOV.

Before I continue it is important to note (again) that this test is far from scientific. The aim is to get a rough idea of the angle of view to within a few degrees of the Fusion’s lenses.

Whilst I will need a fairly accurate value for later steps, I can use trial and error to perfect it within a few degrees during stitching.

For the experiment I set up a basic test in my back garden to measure horizontal FOV.

I placed a 10 meter string across the garden, placing the camera at the center (at 5m). At the left end of this string I placed a flowerpot.

I then used another piece of string, also 10m that I could adjust to measure the angles. At the left end of this string I placed a pink football.

Here’s a birds-eye view of the camera / string setup: 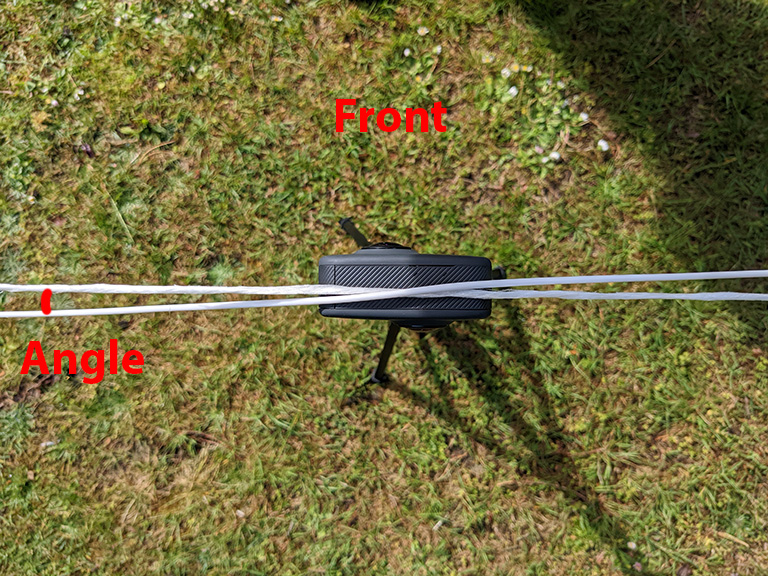 To perform the experiment I kept adjusting the angle (behind the camera) until the pink football was no longer visible (and thus outside the cameras FOV).

Below I’ve cropped the fisheye frames to only include the left view of the football, but you can inspect the entire frames here if you like. 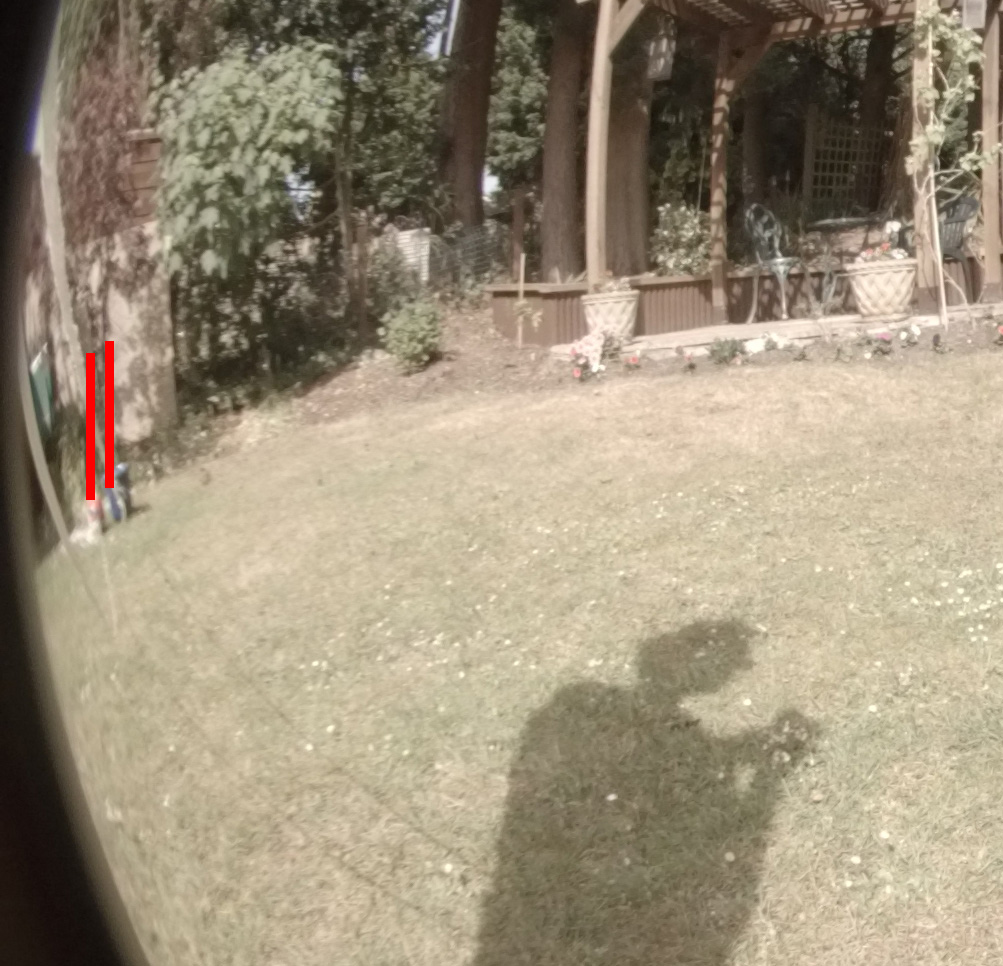 The ball is still visible when around 5 degrees behind the camera. 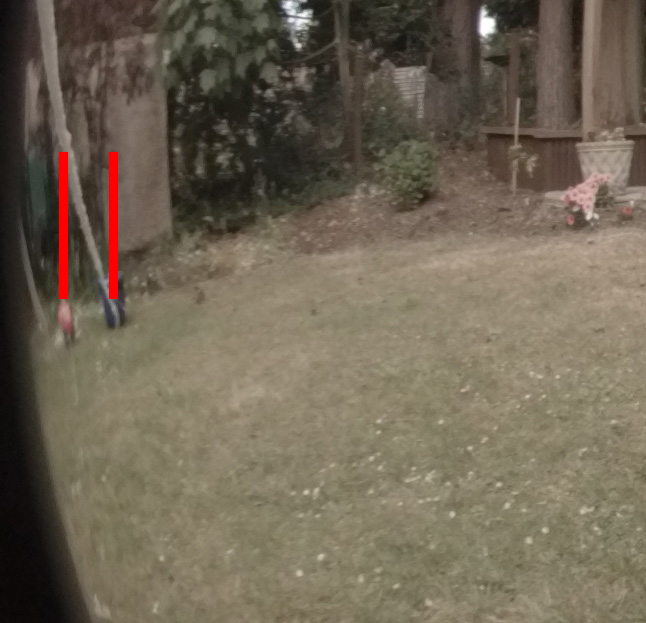 The ball is still visible when around 10 degrees behind the camera. 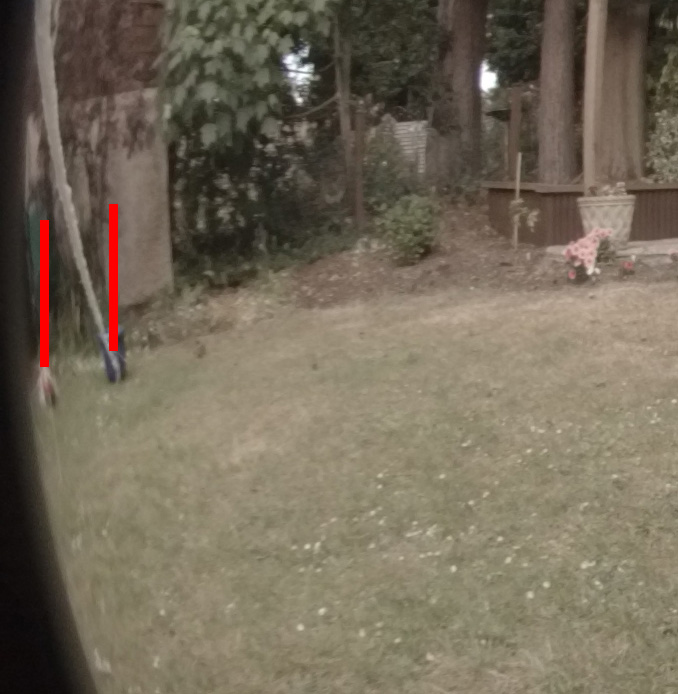 You can see in this final example, the ball is visible, but is much more out of focus than in the previous two examples.

You can see a “blur ring” prominently in some fisheyes from the Fusion reducing the usable part of the frame. This “blur ring” is not linear around the fisheye frame. 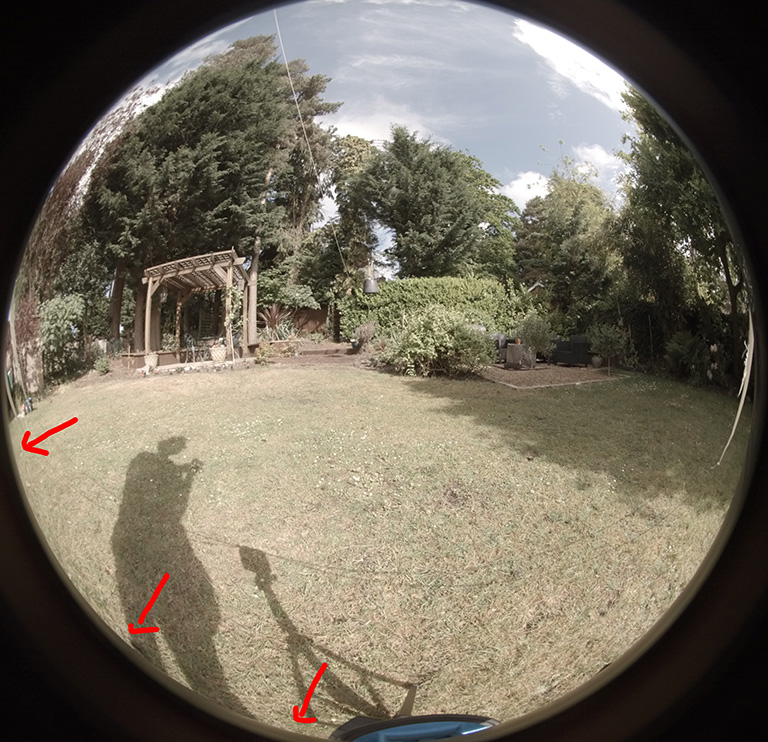 I suspect this “blur ring” is related to the aperture. For example, in low light, the aperture will be wider than compared to very sunny conditions, perhaps leading to a larger fisheye image (and a smaller blur ring).

In the images, you can also see the top and the bottom images are cropped. Therefore the vertical FOV is less than HFOV.

To account for all these factors, my guess is that GoPro software crops the circular fisheye during processing to only include the area of the fisheye that will always be captured and captured without any distortion.

This cropping probably crops a perfect circle (smaller than those shown last week), so that stitching is easier. The example below shows what this cropping could look like: 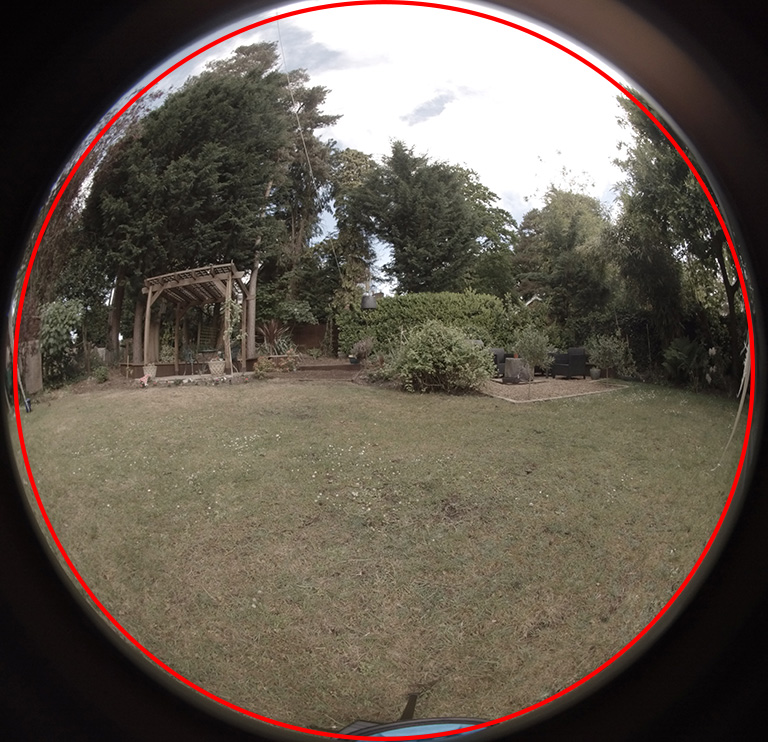 I’d guess the cropped area covers a FOV of about 190 (horizontally and vertically), namely to account for the HFOV cropping in the raw fisheyes.

This is enough to start experimenting with stitching (more on that next week).

Reading a few articles online, there are a few ways FOV for a lens can be calculated using focal length and image dimensions.

We know the Fusion’s focal length from the metadata (3.0).

However, the image size I am not so sure on.

As such, I’m not sure mathematically calculating FOV would offer any benefit over my estimations – I’d still end up with a inaccurate FOV value (and probably more inaccurate as my experiment slightly accounted for redundant areas of the fisheye) that I’d need to modify and experiment with during stitching.