A deeper look at 360 video projections

Recently I’ve been doing a lot of research on 360 video encoding.

There are a lots of ways 360 videos are encoded and displayed, including the projection type used.

In 360 photography, a projection type is a way to map a spherical field of view to a flat image.

Different projection types have different benefits. In the world of 360 videos (which can often be very large), video sharing services are always looking to optimise the data size of content they serve to a viewer.

I talked about equirectangular projections in my post last year about adding a custom nadir to a 360 photo.

The worlds most famous equirectangular projection – the world map. 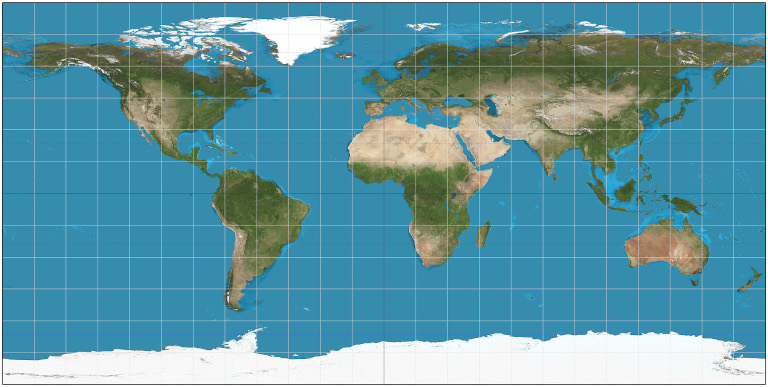 The diagram below might help you visualise this better (see how the top circles in right equirectangular projection are distorted from spherical globe): 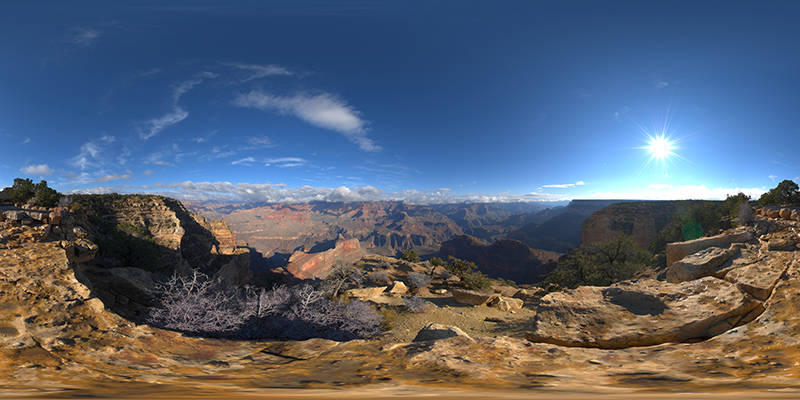 In the world of video games and virtual reality cubemaps are generally the default projection type.

In large part this is because equirectangular images contain a lot of redundant pixels (whereas cubemap can deliver the same image as smaller files, thus saving bandwidth costs) and distortion (around the poles, as shown above, which can be made worse when images are edited).

Cubemaps (or cubic format) uses six cube faces to fill the whole sphere around the viewer. 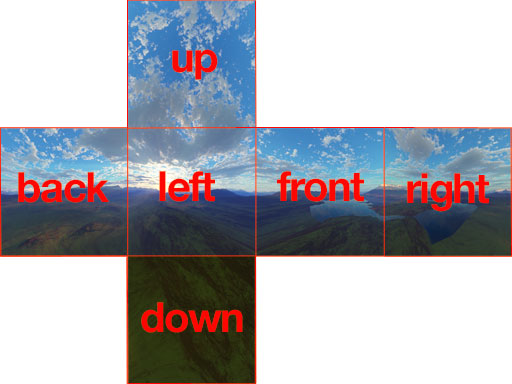 This is conceptually simple: deform a sphere into a cube, then unfold the cube’s six faces and lay them flat.

This is an improvement over equirectangular projections, but it still causes substantial variation in pixel density as is evident looking at the transformation from globe, to cube, to unraveled cube. You can see the edges of the cubes (shown with circles) are more deformed on the left, right, forward and back sides of the cube faces. 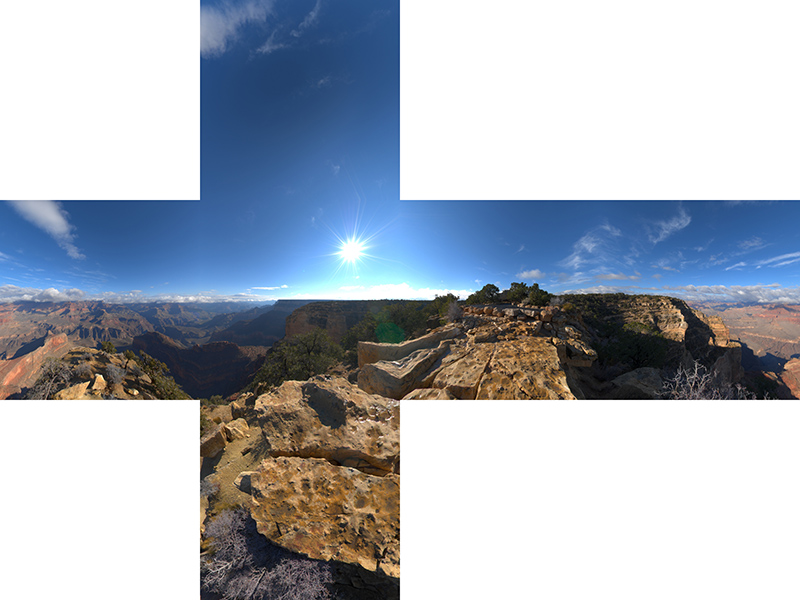 A note about cubemap formats 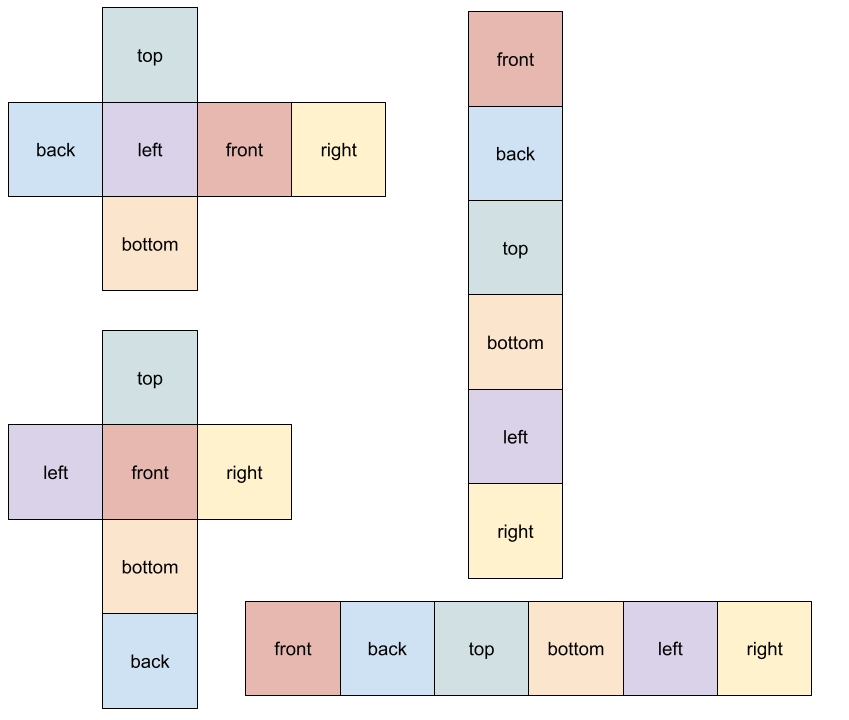 You should be aware there are a variety of cubemap layouts used by different software, as shown above. Ultimately the result of each is the same, a cube.

There are lots of free web apps online that convert images using equirectangular projections to cubemaps, for example, this one created by Lucas Crane.

In light of the above problems, the Equi-Angular Cubemap (EAC) projection was created by Google’s engineering team (see this Google blog post for the announcement). 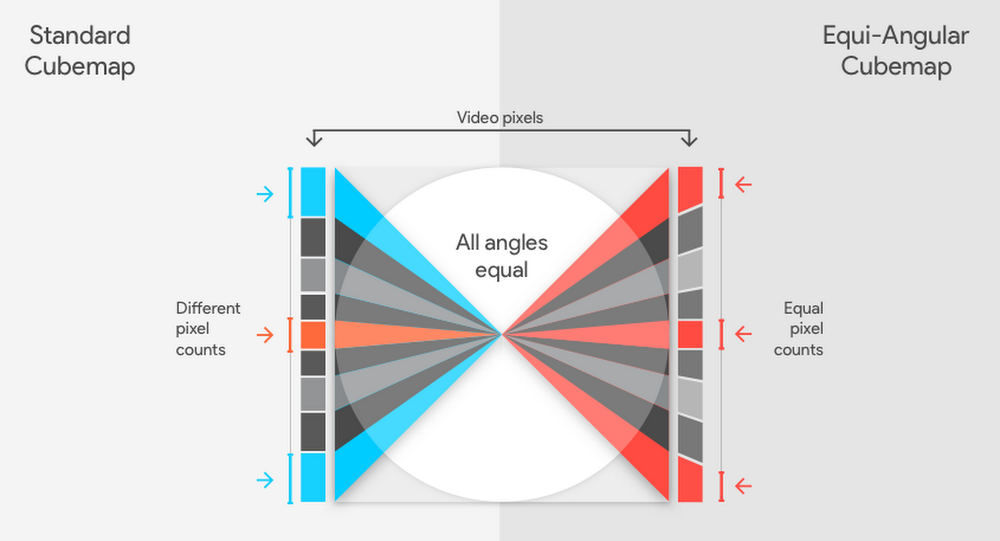 EAC is not too different to the non-equalangle cubemap projection, except you’ll see the traditional cubemap has samples of varying length depending on the sample’s location on the cube face (left side of diagram above). Whereas, for EAC, the sample sizes are the same.

You can see in the Equi-Angular Cubemap transformation that the corners of each cube are not as distorted as they were in the non-equalangle cubemap projection (although it should be noted they are still slightly distorted in EAC).

360 videos uploaded to YouTube are converted to EAC and served using this projection type. Paul Bourke also has a good write up about the YouTube 360 format. 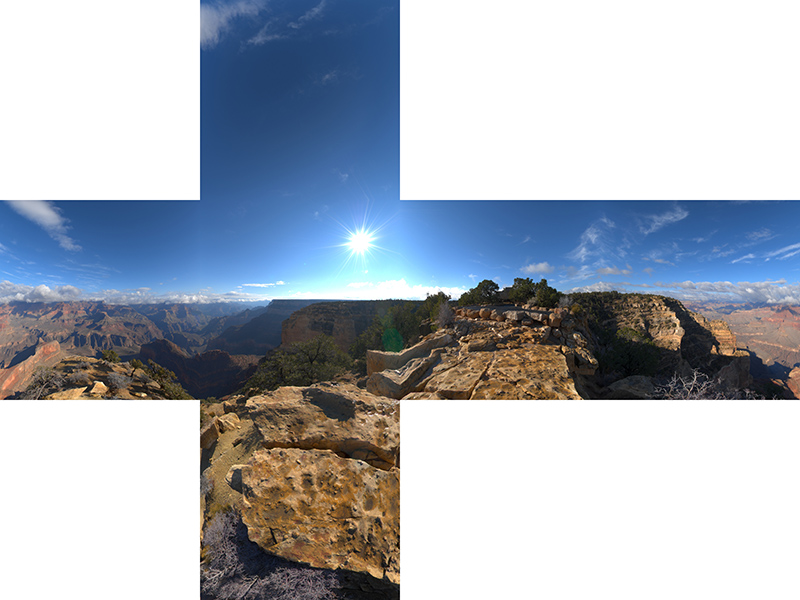 The non-equalangle and Equi-Angular projections might look identical in the example images used above. 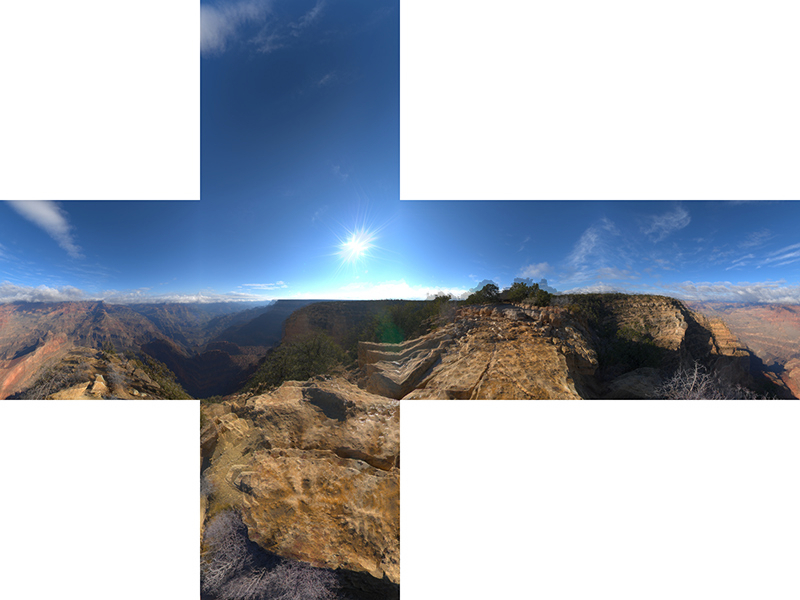 You can now see the images are indeed quite different, although the edges still match perfectly. It can be seen that the EAC version has a “zoom” effect on the interior of the cube faces, this results in a higher resolution there compared to the standard non-equalangle cube map.

The Pyramid projection was announced by Facebook in 2016 to support VR video.

When a 360 video is uploaded, we transform it from an equirectangular layout to the pyramid format for each of the 30 viewports, and we create five different resolutions for each stream, for a total of 150 different versions of the same video.

I won’t attempt to explain this projection type in this blog post as it is fairly complex. This video from the Facebook team gives a very good explanation:

A note on Google Street View 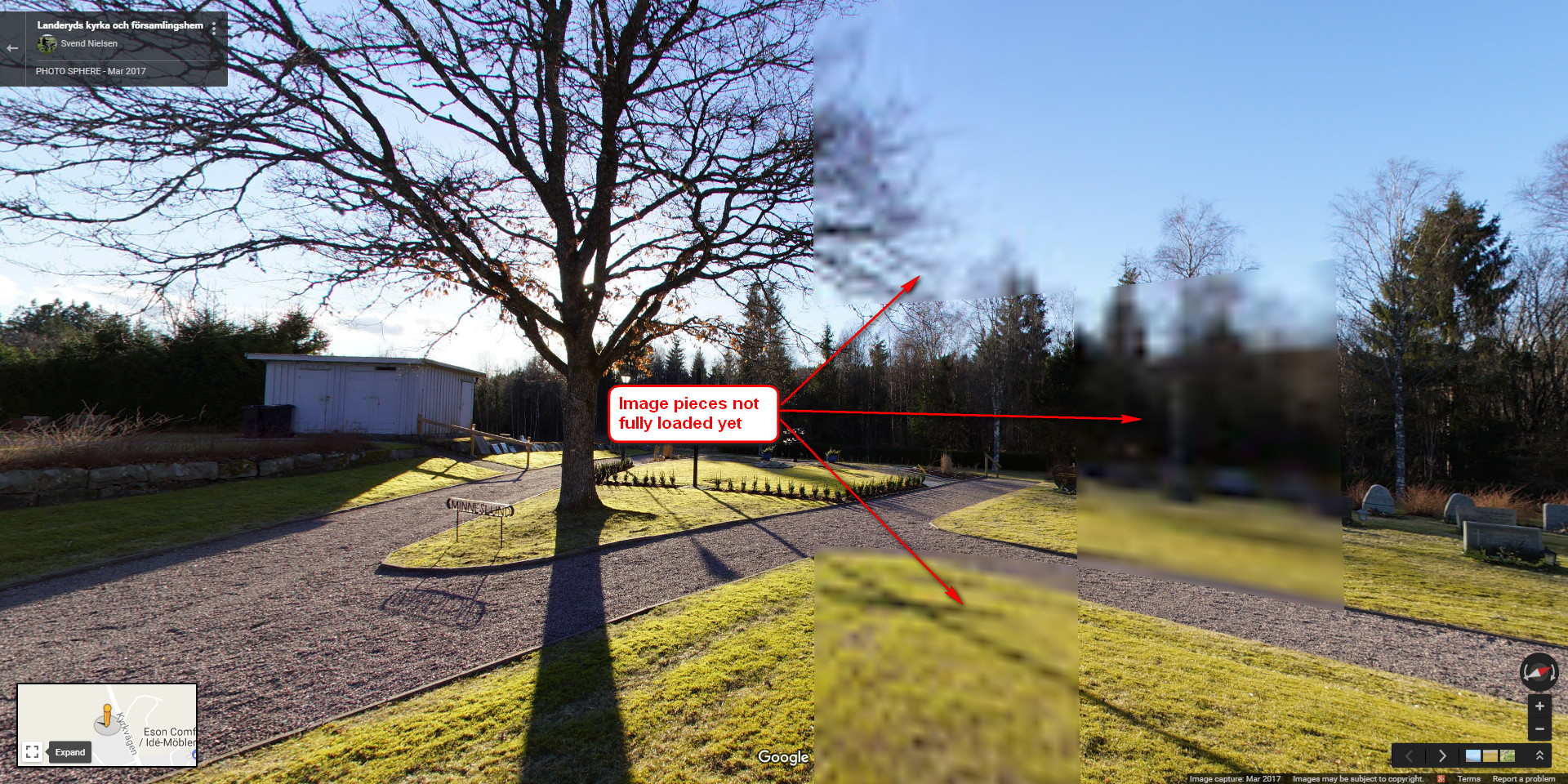 Google Street View loads images with an equirectangular projection, and they optimise the way they load based on your device and available bandwidth.

Part of this optimisation involves loading different parts of the image as quadrants, versus the whole image at once. You can see an example of this in the image above. If you have a fast connection and moderately powerful machine, you have probably never seen this because all quadrants have downloaded very quickly.

This optimisation technique is not to be confused with a cubemap projection, the projection type is still equirectangular.