How we optimised the process of turning a video into frames to create virtual tours in Explorer using speed as a variable.

How we optimised the process of turning a video into frames to create virtual tours in Explorer using speed as a variable.

Last week I talked about the importance of considering framerate for timewarp videos when extracting frames from it.

With the Trek Pack v1 we shot in timelapse mode, where the interval setting was determined by the speed of transport used during shooting. This was a compromise as the Fusion’s video mode was very battery intensive.

The MAX used on our v2 pack improved upon battery performance in video mode and we stated shooting in video mode only. The MAX also only supports a frame rate of 0.5 FPS (1 photo every 2 seconds), which is not paticularly fast for moderate-speed travel (e.g. biking).

One of the biggest benefits of videos is that they can be recorded at a much higher frame rate. In video mode you can record up to 120 FPS @ 3k and 30 FPS @ 5.2k on the MAX. Ultimately, this means there is more footage for us to work with (and discard as needed), not afforded when using timelapse mode.

Though extra frames come at a cost, and we had to apply some trade-offs when building Explorer.

Why not extract all frames of the video?

Assuming each frame is about 10Mb (about right for a 360 photo), that is 180Gb of images. This number is inflated, but you lose the advantage of the compression provided by video codecs.

At scale, this quickly adds up to very big numbers in terms of storage space and processing power required.

How to determine the best extraction rate

For virtual tours, the main measure of extraction comes down to the distance you want between photos.

As noted in this post on the Google support forum, Google Street View paths (photos connected with a blue line) should not be greater than 5 metres apart.

For the optimum viewing experience of virtual tours, we have found photos about a metre apart work best. They are close enough that scenery does not get passed too quickly, nor are they to close together that navigation becomes tedious.

In order to calculate the extraction rate to achieve a spacing of 1 meter you first need to know the speed at which the tour was captured.

There are a few ways to obtain a speed value to determine the frame rate needed;

The table above gives some rough averages for various methods of human powered;

Grab the formulas used in this table here.

Most methods of transport our trekkers use are slow enough where frames are spaced much closer than 1 metre. For example, traveling at 3.6 km/h (1 m/s) with a video frame rate of 24FPS, each frame is spaced 0.04 metres apart. 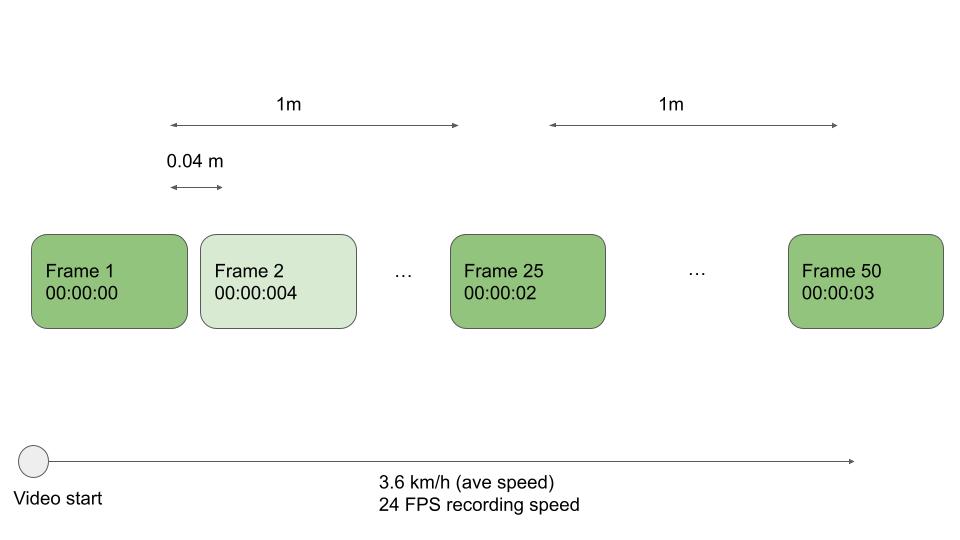 You only run into an issue where frames are spaced further apart than the recording frame rate. At this point you can only extract all frames from the video and will have to accept the spacing provided (see: freefall example).

That said, for our trekkers this is unlikely to occur. At 86 km/h you would need to be shooting at 48 FPS on the camera to ensure you could extract one frame per seconds. Thus, shooting at 24 FPS (offered on all GoPro cameras) you could be travelling at 43 km/h before spacing between each frame exceed 1 metre.

Now, assuming the distance between frames in the video is actually much less than 1 metre (e.g. when walking), the extraction rate used will be the average speed in metres per second rounded up to the next integer (e.g. 8.33 m/s = extraction rate of 9 FPS for spacing of 1 metre).

For a larger spacing (or shorter spacing), you can use the following calculation (also shown with formula here)

You can already see the frame savings over the raw video. If original framerate is 24 FPS, 2 FPS is a 12x reduction in the amount of frames.

Using ffmpeg you can now extract the frames like so;

The telemetry also provides the start position and end position of the video (first and last GPSLatitude, GPSLatitude, and GPSAltitude respectively).

To work out average speed you need to know the distance between the two points.

To calculate distance, you can use the Haversine formula to find the distance between two points on a sphere (Earth) given their longitudes and latitudes.

Once you have calculate the distance, to work out speed;

All that is left to do is adjust speed for frame rate.

We know the framerate (it is reported in the telemetry), e.g.

As an example, let’s say distance was 100 metres from start to end of video, the video was 20 second long, and you want 1 frame every metre. Here is the resulting calculations;

Using this value, you can use ffmpeg like before, adjusting the -r value;

Option 3: use video telemetry to work out speed changes over the video

Here you first work out speed at each stage of the video using the telemetry track.

Note, you will get no more than 18 values for speed each second using a GoPro Camera (18 Hz the max resolution of the GPS chip). This is less than the frame rate.

Note: You could calculate ave speed to 0.1 second resolution, (the ffmpeg -r flag accepts to 0.1 seconds) but it is overkill for our purposes.

You now have FPS extraction values for each second of the video (vs whole video as you used in options 1 and 2). As a result, you now need to modify the ffmpeg command.

Unfortunately, the ffmpeg -r flag does not account for extraction at variable frame rates in a single video. This is because 99.9% of videos have a fixed frame rate.

In option 2 and 3 I calculated speed manually using distance and time values.

GoPro videos offer some help with calculating speed – the speed of travel is actually reported in the GPMF metadata.

Here is the metadata of a sample video shot on the MAX.

You will see two types of GPSSpeed values are regularly reported alongside position, GPSSpeed and GPSSpeed3D.

GPSSpeed is the horizontal speed (2 Dimensional – latitude and longitude) aka ground speed (it is the same as the Haversine formula you used earlier).

GPSSpeed3D accounts for horizontal and vertical changes (3 Dimensional – latitude and longitude and altitude), it is aware of the mountains and valleys you might have traversed (from altitude values reported). 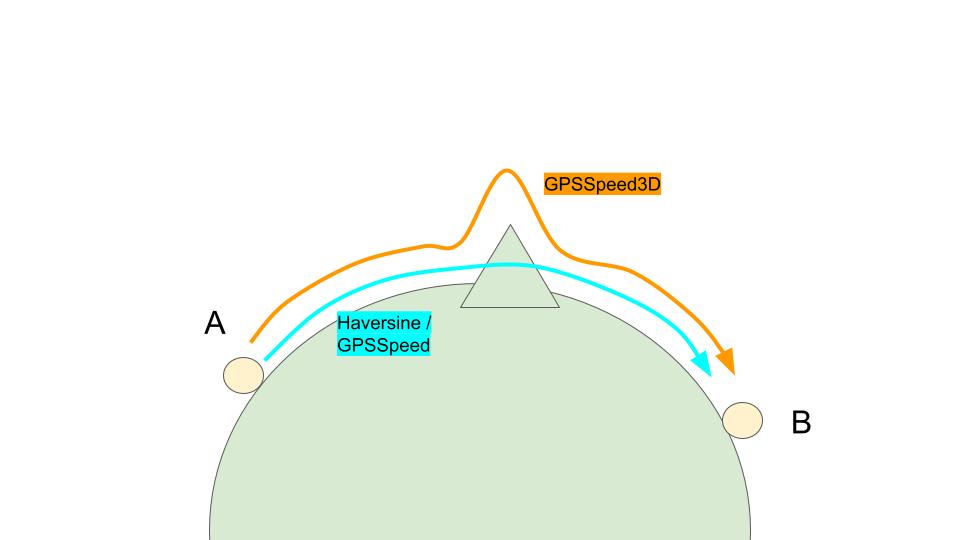 Using the time reported in GoPro telemetry will not offer much accuracy over calculating manually (you are doing the same calculations), but it will save you the time and processing power to do those calculations (although you will have to write to code to correctly ready speed values). As such, I prefer to do the manual calculations in my code.

For example, when mapping objects in real space using Photogrammetry.

The resulting 3D models are more accurate when there are more data points (frames) at slightly different angles because the code has more knowledge to work with.

Again the trade-off comes down to power and storage. At small scale, extracting higher frames is fine, but when you are processing 100’s of videos a day, costs will quickly add up.

« Previous post: Turning a GoPro TimeWarp Video into Photo Frames Next post: Extending the battery life of a GoPro MAX in cold weather »