Overlaying GoPro Telemetry as a map onto Videos (includes 360 videos too!)

Put a map inside your GoPro video showing exactly where it was shot.

Put a map inside your GoPro video showing exactly where is was shot.

A few weeks back I showed how to use gopro-telemetry to extract gpmf metadata from GoPro videos.

Given the types of videos created when making virtual tours, one of the uses for the resulting .json telemetry file is mapping.

I was recently thinking it would be cool to add a live map into a video to show the exact position it was shot.

It is possible as both the video stream and telemetry stream from gopro-telemetry (.json file) both contain time information that can be used to overlay the correct telemetry position at the right video time.

I set out to create a video with a Mapillary style map overlay showing both the current position of the video and the entire route covered.

Here is how I used gopro-telemetry, MapBox, ffmpeg, and a few other tools to bring this idea to life…

For this example I will use two videos:

I have extracted the GPS5 telemetry stream using gopro-telemetry for both these videos.

In the gopro-telemetry .json there are two time values;

The telemetry contains GPS information (timestamp, latitude, longitude). For each time,lat,lon point I will generate a static image showing that point on a map.

The map images can then be wrapped into a video that can be overlaid onto the original video, creating the effect of a real-time map-in-video showing the current position in the world that the video was filmed.

2. Generating a GeoJSON for the overlays using gopro-telemetry

The MapBox Static Images API has a free tier which allows for 50,000 request per month at no cost. Ignoring some trial and error, I only need about 500 calls for each of the videos above.

Given our videos are outdoors and adventure based, I will use the MapBox Outdoor map style, retrieved using the endpoint https://api.mapbox.com/styles/v1/mapbox/outdoors-v11/static/.

I will overlay onto the map a:

The first GeoJSON (000000.geojson – named in sequential order of points, starting with 0) will look like this for GX010044.MP4 (note, I have only inserted the first 3 GPS points for this example):

In the second GeoJSON (000001.geojson), the LineString object will remain the same, however the Point will be updated to the second point in the telemetry,

…and so on for all of the remaining GeoJSON files. Note, the geojson is in lon,lat format.

My inspiration for the overlay comes from Mapillary, a-picture-in-picture map in the bottom left corner of the video, so I need to resize the map images accordingly.

Note, MapBox will only generate images with a length or width less than or equal to 1280.

For HERO video, I have found the following dimensions look best; 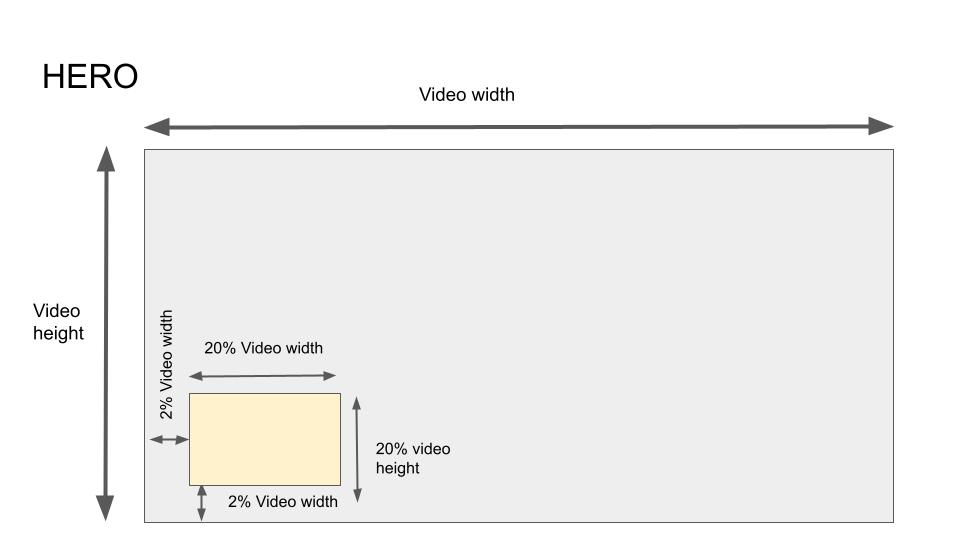 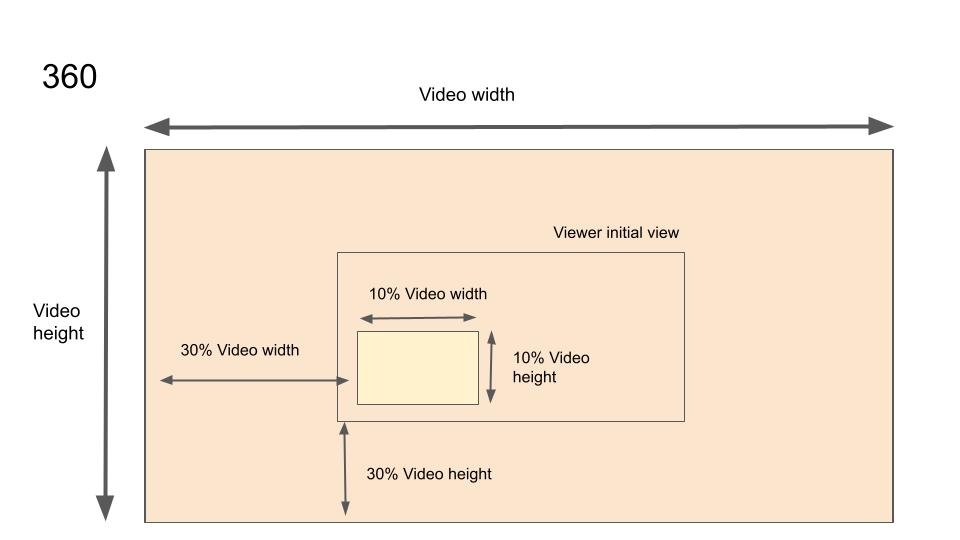 I explained the need to convert a normal projected file into the equirectangular space in my post on generating a nadir using imagemagick last year.

Now, you could convert the map to an equirectangular projection too. However, as I noted in that post:

If you’ve every looked at a equirectangular projected 360 photo you will have clearly seen how distorted it is at the top and bottom of the image, but less around the center.

The center, where I plan to overlay the map, as shown, suffers the least distortion from a normal projection, meaning you can get away with not converting it (as long as it doesn’t stray too near the top and bottom of the video – you’ll need to experiment).

If you did need to convert the map to an equirectangular projection you would first need to create it using the API and then:

I won’t convert my map to equirectangular in this post (judge the output for yourself), and will simply resize in the same way I showed for non-equirectangular videos.

My calculations for map image dimensions are a little different here because I want my map to be immediately visible in the 360 viewer when the video plays, and the way equirectangular videos appear in the viewer is different.

As the viewer does not contain the entire video in frame, I reduce the width and height of the map to just 10% of video width and height respectively. The margins are also much larger, to ensure the map shows in the initial view (before the user starts to look around).

You can pass then pass the newly created GeoJSON files to MapBox’s GeoJSON endpoint.

MapBox accepts the GeoJSON object encoded as a URI component passed in the URL.

Therefore the only thing that is left to do is minify and then encode each GeoJSON file so it can be passed like so;

These are the required parameters, but there are more documented here should you want to play around.

{LON},{LAT} are the map center (MapBox also expects lon,lat format), {ZOOM} is the MapBox zoom level, and {WIDTH}x{HEIGHT} were calculated at step 3.

Using the GeoJSON code snippet shared above (minified), the full command would be;

You might run into issues here depending on how many points are in your telemetry file. MapBox has a 8192 character limit on URL lengths. .geojson files for videos longer than a few seconds can start to break this threshold.

There are three options in this case;

5. Create a video file of the images using ffmpeg

Now that we have the map images we can overlay them onto the video.

This is also reported as a rounded FPS value at the end of the GX010044.MP4 telemetry json;

Keep in mind, videos on GoPro cameras can be shot a varying frames rates. In our example the framerate is 30 FPS, but other GoPro cameras support slower and faster framerates (up to 240 FPS @ 2.7K on the HERO 10).

This actually counts packets instead of frames but it is much faster. Result should be the same. If you want to verify by counting frames change -count_packets to -count_frames and nb_read_packets to nb_read_frames.

A quick note on GoPro GPS

The GoPro GPS sensors capture at 18Hz, so that’s a maximum of 18 GPS points per second.

It is also possible that fewer than 18 points might be reported per second in the telemetry (for example, where there is a lot of obstruction). 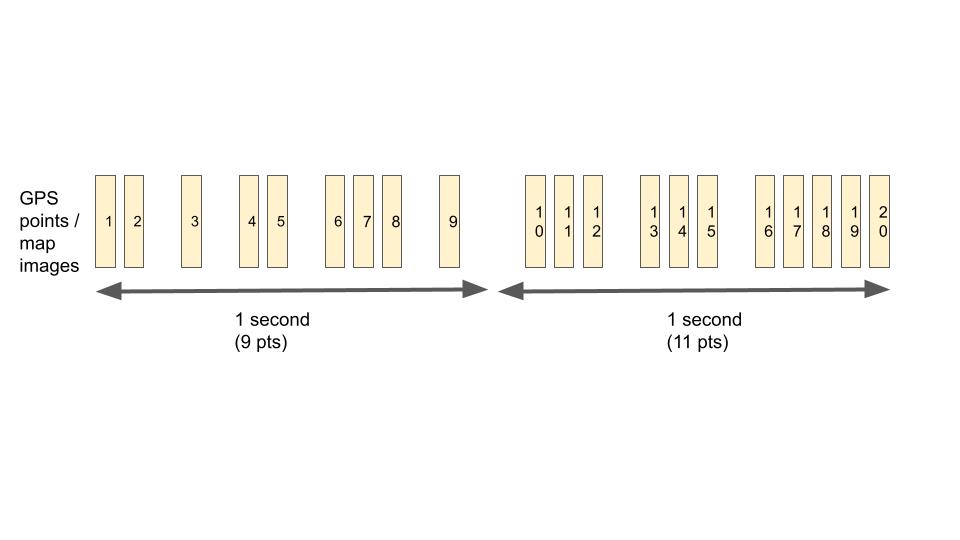 This also means you’re very unlikely to have have an even distribution of GPS points for every second of the video (e.g. 1 second might have 18 GPS points, and the next might only have 5).

As I do not want to lower the framerate of the video, I need to dynamically adjust when the map images are shown. As such, some map frames will be shown in the overlay video for longer than others.

To do this we can create a new video from the frames by;

Once the new video file exists with the map images, we can simply overlay it on the original video in the overlay positions calculated at step 3 (or whatever you want them to be).

You can set the coordinates of the overlay filter using x (from left) and y (from top) like so:

You’ll also see I map all the streams using -map [s0] -map 0:1 -map 0:2 -map 0:3. Be careful with this, use ffmpeg to first determine what streams exist in the original video, and update the command above with the correct streams. More about this and how to copy global metadata, essential for equirectangular videos, here.

This is too much to do manually. Therefore, we created a small script called GoPro Map Overlay that automates this entire process.

The instructions in the readme guide you through the setup and running of the script.

It was used to create the following videos for the examples used in this post.

One of the downsides of MapBox is that it only creates static images with length/width dimensions not exceeding 1280 (mapbox_img_w: 0.24 – 24% is maximum I can pass for this video resolution).

For equirectangular videos I think this effect works really well.